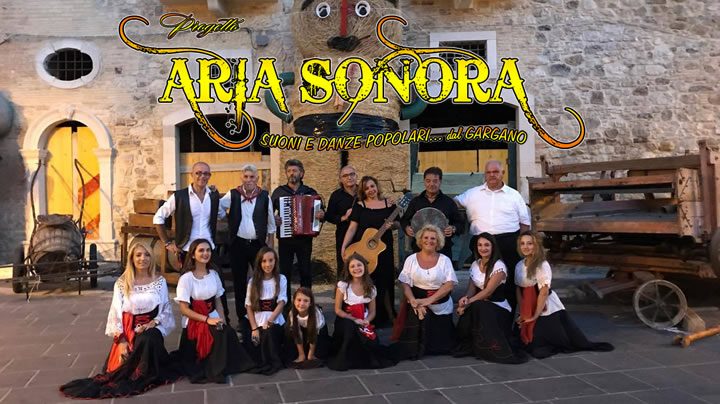 MUSIC AND TRADITIONAL DANCES OF GARGANO

The Aria Sonora Project, born in October 2013 by teacher Antonio Russo, is an artistic association composed of the dance group ARIA SONORA Danze Popolari from San Nicandro Garganico and the musical group PRAPATAPUMPA Folk from Apricena. The two groups promote and spread the culture of the popular traditions of Gargano, offering a traveling show with sounds, songs and dances that involves everyone with the overwhelming music that only folk can express.

Finalizes its activity to promote and spread the traditional dances typical of its territory.

The dance group ARIA SONORA Popular Dances, belonging to the “DIAPASON” Musical Cultural Association chaired by master Antonio Russo, with operational headquarters in San Nicandro Garganico (Foggia), affiliated to the FITP – Italian Federation Popular Traditions, is a group that is born with the intent to value and spread the culture of the dances of the Gargano promontory and of the entire Apulian territory.
It is formed by dancers united by passion and love for their territory and conducts a careful research aimed at rediscovering the ancient local traditions, which gather around it, their town with neighboring ones, aimed at enriching the music-dancing group with the values of the sounds, songs and tarantellas of the entire Capitanata and the knowledge of other dances from Central and Southern Italy, the most representative of Salento and Naples, all brought together in a single modern reworking in full compliance with the techniques and executions of origin.
The Corps de Ballet, in addition to the collaboration with Prapatapumpa Folk of Apricena, has sown concerts throughout Italy and international festivals, participated in the major events of the Gargano promontory, on tour at the “Raduno dei Suonatori di Tarantella”, as Corps de Ballet “La Montagna del Sole” Project Carpino Folk Festival at Parco della Musica in Rome with the Ethnomusicologist Prof. Salvatore Villani, Cantori di Carpino the Italian Popular Orchestra conducted by Ambrogio Sparagna. Dancing intervention with artists such as Eugenio Bennato and Cantori di Carpino. In 2015 the group took part in the Ethnic Orchestra of the Gargano participating in 2016 in the traveling stage of the “Notte della Taranta” in Lecce. From 2016 he is chosen as the corps de ballet of the 1st Edition of the “Serenata alla Tarantella” and reconfirmed for the 2017 and 2018 Editions. In the current year 2018, together with the Cantori di Civitate of San Paolo Civitate, collaborate through a school project with “Poeti del Gargano” and “Poeti di Capitanata” by the President Franco Ferrara.

Music and dance of the popular tradition

“Prapatapumpa Folk” is synonymous with love for folklore and the Apulian tradition. It offers ballads by Matteo Salvatore, tarantellas and Salento pizziche.
Born in 2010 in Apricena (Foggia) by the masters Barbara Cocciardi for the artistic musical direction and in 2013 by Antonio Russo for the dance care, through the Profetto Aria Sonora, from San Nicandro Garganico, which preserves the name of the dance group, for the purpose of recovering and enhancing the musique-dancing heritage of Gargano and Salento and the work of the great poet from Apricena-storyteller Matteo Salvatore and the singer of Carpino Antonio Piccininno. The name of the Association recovers the refrain of the tarantella of the Poet from the Gargano “Proverbi Paesani”. For several years it has been registered in Federazione Italiana tradizioni Popolari.
The Groups have been recognized by the respective municipalities of origin, “Municipal Interest Groups” and by the Ministry for the Cultural Heritage and Activities, through FITP “National Interest Groups”. They perform in theaters, in the squares of Italy and participate in important popular music events. Prapatapumpa Folk avails itself of the collaboration of the School of popular dances of the South “Progetto Aria Sonora” by the master Antonio Russo.

The “Diapason” Cultural Musical Association, based in San Nicandro Garganico, is chaired by Antonio Russo and is affiliated to the FITP – Federazione Italiana Tradizioni Popolari, the largest coordination of Italian Folk Associations and Groups. It makes use of various activities with particular reference to traditional music with its own Folk Group “ARIA SONORA Popular Dances”.
The Group was born from musicians and dancers united by the passion and love of their town and conducts careful research aimed at rediscovering ancient values, sounds, songs and traditional dances with the intent to promote, enhance and spread the tarantellas of Gargano, candidates for UNESCO Intangible Heritage, in addition to the knowledge of other dances from central and southern Italy, all brought together in a single modern reworking in full compliance with the techniques and executions of origin. The Association, since September 2013 as part of Progetto Aria Sonora which preserves the name of the group, has 4 instructors that are activated for the promotion of folk dance courses in their own town. It has organized various stages of tarantella Gargano and knowledge of pizzica in the laboratories of neighboring towns and a National Level Seminar with the Training School of the UISP Lega Danza for teachers of ethnic dances of Apulia, in collaboration with the Associazione Culturale Taranta Tradizioni Popolari of Florence, presided over by the anthropologist of dance prof. PINO GALA and TIZIANA MINIATI.
Collaborations to the dance for the TARANTELLA of GARGANO with I CANTORI di CARPINO in Style, History and Music of Carpino, with I PRAPATAPUMPA FOLK; participation in Raduno della Notte Azzurra on occasion of the Patronal Festival of Manfredonia with the groups: Tarantula Garganica, Cantori di Monte Sant’Angelo and Cantori di San Giovanni Rotondo, to the dance with other typical tarantellas of the promontory.
Guests and Participation in Major Events with the FITP; in December 2012 they were received at the Audience by Pope Benedict XVI at the Vatican City and St. Peter’s Square in Rome, participation in the events of International Festivals promoted by the “Italia e Regioni” Federation and “Il Fanciullo e il Folklore” with the “FANCIULLETTI GARGANICI” children. Dancing intervention with Artists such as EUGENIO BENNATO and CANTORI di CARPINO in 2013 in Lucera (FG); participation in Tour of RADUNO dei SUONATORI di TARANTELLA, with the most established groups of the Gargano Promontory, at the 2014 edition.
Participation in 2015 in the AGRI-CULTURA e CAMPAGNA project, with Le Masserie Didattiche in the squares of Foggia, San Severo, San Giovanni Rotondo, Lucera and subsequent final stage at the FIERA del LEVANTE in BARI, on occasion of EXPO 2015, with the group of music and songs of the rural civilization of Daunia “I CANTORI di CIVITATE” from San Paolo di Civitate (FG). Participation in July 2015 at the International Folk Festival “EUROFOLKITALIA” in Monte Sant’Angelo (FG). Organization and performances in the 2015 Tour called “GARGANO in TARANDANZA” in collaboration with the group of music and songs of the Gargano tradition “MULIERES GARGANICHE” from San Giovanni Rotondo (FG). In May 2015 they were chosen as Corps de Ballet “La MONTAGNA del SOLE” Project CARPINO FOLK FESTIVAL at PARCO della MUSICA in ROME with the Ethnomusicologist Prof. SALVATORE VILLANI, I CANTORI di CARPINO and ORCHESTRA POPOLARE ITALIANA directed by AMBROGIO SPARAGNA. From October 2015 they took part in the ORCHESTRA ETNICA del GARGANO conducted by the Orchestra Master Prof. Salvatore Villani, Director of Centro Studi di Tradizioni Popolari del Gargano e della Capitanata. Official debut on December 16th at the “G. Verdi” Theater of San Severo (FG); December 19 in San Giovanni Rotondo (FG); December 20 in Teatro a Fiuggi (FR); on December 30th at Casa Matteo Salvatore in Apricena (FG) it follows in January 2016 at the Auditorium “P. Giannone” in San Marco in Lamis (FG), at the “Teatro RASI” of Ravenna; at the Manfredonia Carnival (FG); at the Municipal Cloister of San Giovanni Rotondo; at the World Folklore Headquarters on the occasion of the invitation to Luigi Chiriatti, Artistic Director of the Notte della Taranta 2016. On June 18 at the former Tortorelli quarry on occasion of the inauguration of the Monumental Tomb of Matteo Salvatore in Apricena. Guests with Orchestra Etnica del Gargano, on August 14th 2016 at the itinerant stage of the Notte della Taranta in piazza Sant’Oronzo in Lecce. In 2016 he was chosen as the Corps de Ballet of the Festival “Serenata alla Tarantella” in Vieste (FG) and reconfirmed in the 2017-2018 editions. For four editions from 2014 to 2017 they are asked to conduct Stage and dance party on the Tarantella Garganica at Laboratori Artefacendo in San Marco in Lamis (FG) on occasion of the “Cchjù fa notte, cchjù fa forte” event. In 2017 they participate in the mini tour with Orchestra Etnica del Gargano in the Aeolian Islands in Sicily. Guests of the FITP in 2018 at the presentation of the Organetto World Championship in San Giovanni Rotondo (FG).
Participation at Folk Contest 2018 in Sulmona (AQ) with Orchestra Popolare del Saltarello. In 2018 together with I Cantori di Civitate they collaborate through a school project with “Poeti del Gargano” and “Poeti di Capitanata” by President Franco Ferrara.