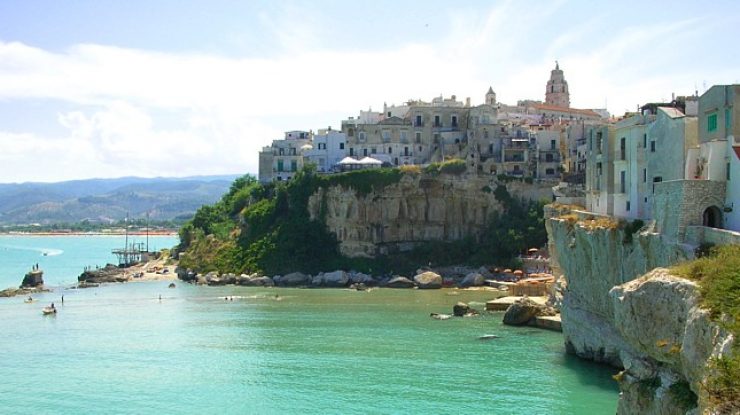 A pearl of the Gargano  –

Families with children, couples or young people looking for entertainment: the holidays to Vieste succeed to satisfy really everyone. After all it is one of the localities most beloved of Apulia and not only in summer.

Located on the eastern point of the Gargano Promontory, surrounded by natural landscapes of rare beauty, among the most beautiful of the Gargano National Park, Vieste is the perfect locality both for those seeking relaxation and peacefulness, both for the lovers of aquatic sports and excursions, both for those which on holiday love the nightlife. With all its hotel, residence, villages and camping, then is able to satisfy any need on holiday.

The discovery of numerous archaeological remains has allowed to establish that Vieste is also one of the most ancient towns in Daunia. For its strategic position, the town was marked by the passage of various dominations: Byzantines, Normans, Lombards and Swabians. A story of which there are still traces in many monuments of the town.

REASONS FOR VISITING VIESTE
The coast. To attract every year tourists from all over the world are especially its numerous beaches, from those most equipped and tourism to the less frequented and wildest, characterized by gigantic faraglioni, bays, coves, cliffs and beautiful sea caves. Thanks to the remarkable quality of the coast and sea waters, Vieste has obtained several times the Blue Flag of Europe.

The ancient village of Vieste, picturesquely located on rocks to peak on the sea, is a charming tangle of small streets and squares, whitewashed houses and narrow streets animated by local shops, shops of typical products and handicraft articles.

Pizzomunno. The symbol of the town remains its monolith of 25 meters which, wedged on the shoreline, in front of the town, stands out on the coast. Its name derives from a legend to which it is tied this spur of rock. It is narrated that Pizzomunno was a young fisherman of Vieste which, faithful to his beloved Cristalda, not ceded never to the temptations of the sirens. These, peeved, they dragged Cristalda at the bottom of the sea and they transformed Pizzomunno into stone. But the legend wants that the two lovers meet every 100 years for reliving their passion in one night.

The nightlife. With its characteristic historic centre, rich in inns and typical restaurants, and with the Lungomare Enrico Mattei, a large boulevard studded with many beach clubs, public places, pubs and places for entertainment even at night, Vieste is the center of the nightlife in Gargano.

The harbour is a safe landfall for small and medium boats and an excellent starting point to reach the enchanting Tremiti Islands, but also the Croatia.

Windsurfing, Placed in a geographical position influenced by all the winds, Vieste is a very desired destination for the lovers of surfing, windsurfing and kitesurfing.


WHAT TO SEE IN VIESTE

Its historic centre, to peak overlooking the sea, with its narrow and winding small streets and its steep staircases, winds between white houses from small doorways that occasionally are joined by slender arches. If you are looking for a souvenir of the Gargano, here you will find many shops of local handicraft and typical products.

The Sea Caves are one of the most precious treasures of the entire Gargano. There are many sea caves in the stretch of coast between Peschici, Vieste and Mattinata: real caves dug into the limestone rock, each with something unique to show. To admire them up close, you can make an excursion on board the motorboat Desirèe that departs every day, from 1 April to 31 October, from the harbour of Vieste.

The Necropolis La Salata, situated about 7 km from Vieste, in the east of the town, is the cemetery complex more important of the Gargano. It is Paleochristian origin and is composed by more than 300 graves dug in the rock dating back at the III-IV century AD.

The Trabucchi. They are another symbol of the Gargano and of its coast. In the stretch between Peschici and Vieste there are about 13 Trabucchi. They are ancient and ingenious fishing instruments, with long wooden supports. They are protected as monumental heritage of Gargano National Park and they offer a unique spectacle, admiring them from the sea. The Cathedral of Saint Maria Assunta. Also known as the Duomo of Vieste, built in the XI century, it is among the oldest examples of Apulian-Romanesque architecture, remodelled following according to different styles. In its interior stands out the wooden statue depicting the Holy Virgin Mary of Merino to which the inhabitants of Vieste are very devoted. According to tradition this statue was found on the beach of Merino. And just here in this place was built the Sanctuary of Santa Maria di Merino, that still today it is destination of pilgrimage of the faithfuls.

The Castle, built by Frederick II of Swabia and rebuilt by the Spanish in 1537, is located in the upper part of Vieste, has a triangular shape and rises overlooking the sea. Inside is an exhibition of tools from torture that make one shudder. The view enjoyed from its Belvedere is fantastic, as well as the Castle seen from the sea.

The Lighthouse. It is located on the islet of Santa Eufemia, located right in the face of Vieste. Above its tower, you will can admire a spectacular brass lantern that every day at dusk turns on illuminating all the town with its beams of light.

The Malacological Museum absolutely deserves a visit. Here is guarded an extraordinary collection of seashells, starfish and other natural forms marine (they are more than 12 thousand): a real dive in the seas of the world without the need to getting wet.

Find out more or adjust your settings.