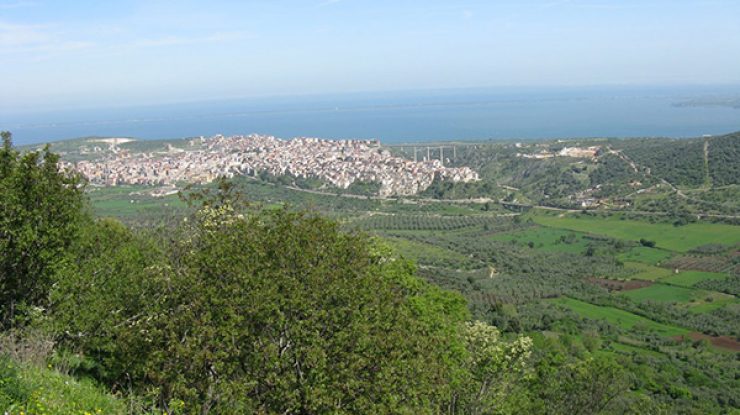 Where history is interwoven with the lagoon  –

A holiday on the Gargano also means to discover its suggestive villages. Among these definitely worth a visit Cagnano Varano, a charming town situated north of Gargano, characterized by a dominant location on the suggestive Varano Lake that wets a part of its territory.

The popular tradition traces to the ancient city of Uriah, the roman colony disappeared following the floods of Varano Lake. What is certain is that Cagnano Varano results to be one of the first inhabited centers of Gargano. The history tells us that in the Middle Ages it was a feud of some families which, in turn, occupied the Baronial Palace, also called Casale, an ancient Norman fortress, renovated several times over the years.

Land of peasants and shepherds, the history of this town was for a long time turbulent due to the various dominations suffered. Today one can still see the remains of the ancient walls that protected the center from attacks coming from the sea.

Cagnano Varano is however also known for the famous Grotta di San Michele (Cave of St. Michael), one of the most visited destinations of pilgrimage del Gargano: this is a sanctuary, located a few km to the west of the town, where tradition has it that the Saint appeared to some of the inhabitants of the place before going to Monte Sant’Angelo.

Not to be missed during your visit in Cagnano Varano, also the historic center, the seaplane base “Ivo Monti“, the Mother Church of Santa Maria della Pietà and of course the near Varano Lake, considered one of the most important resources for the town (significant is the mussel farming and breeding of eels). To understand the historical bond that exists between the inhabitants of Cagnano and this lagoon, just visit the so-called “Pannoni“, the artificial caves situated next the homonymous lake.

REASONS FOR VISITING CAGNANO VARANO
The historic heritage. The territory of Cagnano is steeped in traces dating back to the Paleolithic Age: the various iconographies and frescoes that decorate some buildings testify the settlements dating back already to the early Christian era.

The beach of Capoiale. It is located on the tongue of land situated between Varano Lake and the Adriatic Sea, in the locality of Capoiale, seaside hamlet of Cagnano. Crossing the State Reserve of Varano Island, with its majestic pines and eucalyptus trees, you will find yourself to sink your feet into a soft and clear sand, ideal beach for spending a relaxing beach holiday.

The State Reserve of Varano Island. It is an area of 145 hectares of Gargano National Park, between the territory of Cagnano Varano and Ischitella, which stands out for its dense vegetation near the coastal dune with majestic pine forests of pine of Aleppo and maritime pine, eucalyptus trees and a rich Mediterranean maquis. A concentrate of biodiversity in the Gargano.


WHAT TO SEE IN CAGNANO VARANO?

The Cave of San Michele. Located 3 km from the center of Cagnano Varano, is one of the destinations of the faith more frequented of Gargano, especially during the celebration of San Michele, which is celebrated on 8 May. And it is here, in fact, that, according to the local tradition, Archangel Michael stood before traveling to Monte Sant’Angelo to define his abode. Dating back to the Paleolithic period, the cave holds altars and frescoes that testify to the presence of man, but also stalactites and moss that remind its karstic nature. Of particular interest to its inside there is the Pila of Santa Lucia, a spring that collects the waters of the oozing. According to the tradition, dipping their hands in holy water and passing them on the eyelids, it heals eye diseases.

The historic center. If you enter among its narrow alleyways, you will notice white houses very close, built in such a way as to protect the inhabitants from strong winter winds. Here are still visible the ruins of the ancient medieval walls, between which the Arch of San Michele and the entrance of the Baronial Palace. Really characteristic then the entire nucleus of the village called “Lu Caùt” which until 1600 was the heart of Cagnano. The term Caùt derives from the conformation of the houses that seem to holes (caùti) dug into the rock.

The Pannoni. Are artificial caves dug in the tuff, located along the southern side of Varano Lake. Their origins are ancient: inside them, in fact, have been found finds dating back to the Early Middle Ages. In time took various functions: were used as dwellings, as burial places and finally as a deposit for fishermen. It is not excluded that the area has been frequented in the past for the presence of a number of springs, including the homonymous spring Pannoni and, to a few hundred meters, the spring Bagno.

The Church of Santa Maria della Pietà. Situated in the historical center of the town, it is one of the places of worship most visited by tourists and citizens of Cagnano. Built between the XV and the XVII century and consecrated in 1676, it has a baroque style with a majestic bell tower which dominates the town. Inside you can admire many artworks by the high historical and artistic value.

San Nicola Imbuti. It is situated along the western shore of Varano Lake, about 10 Km from Cagnano Varano. Seen from afar might seem an old abandoned village, in reality is an important historical site of Gargano. So named for the funnel shape that extends toward the lake, the town was first a Benedictine Monastery, destinazion of many pilgrims going to Monte Sant’Angelo, but its importance grew when, in the second decade of the twentieth century, to counter attacks coming from the opposite shore of the Adriatic, there was built the seaplane base dedicated to lieutenant machinist Ivo Monti. The complex of buildings in colonial style, today in a state of abandonment, it was used as a military base during the first and the second world war and in 1918-20, for promoting the worship to all staff of the seaplane base, it was also realized the Church of Santa Barbara of which today are visible only a few remains.

The Museum of Territory and Culture of the lagoon. Located at the former Pesa di Bagno, where once was done the weighing of the fish, it was opened in 2015 and houses the collection of finds, documents, photographs and objects on the territory of Cagnano and on culture of Varano Lagoon. Depart from here also excursions to the sites of historical and naturalistic interest of Varano Lake, between which the ancient village of Pannoni, the settlement of prehistoric era and late ancient period of Bagno, the Cave of San Michele in Cagnano Varano, Varano Island and the paths that retrace the ancient sheep tracks around the lake.