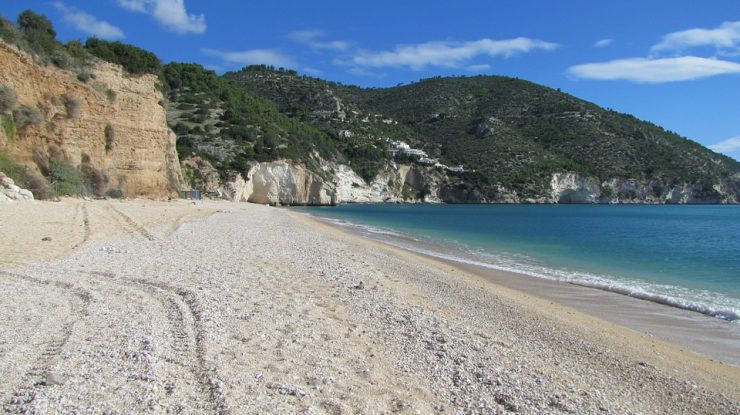 A journey into Gargano between dream beaches, orchids and traces of the past  –

If you are looking for crystal clear sea and uncontaminated nature during your holidays in Apulia, Mattinata is the ideal destination for you. Situated to the south of the Gargano promontory, the town is perched on two hills, Coppa Madonna e Castelluccio, surrounded to the south by Monte Saraceno, to the north by Monte Sacro and to the east by a vast plain of olive groves and by the Adriatic Sea, thus representing a natural terrace from which you can admire a beautiful landscape.

Several times awarded the Blue Flag thanks to the clarity of its sea waters, Mattinata boasts one of the stretches of coast most beautiful of the Gargano.

Mattinata was known in the Roman period under the name “Matinum” and it’s now called the White Butterfly of the Gargano, for the curious shape of the inhabited center. It’s a destination not to miss even for its historical center which is characterized by its typical small white houses that have kept almost intact the structural characteristics of the past, such as the stairways in stone, the very narrow streets and the elegant historical palaces.

Mattinata is also a destination much frequented by the lovers of botany by virtue of the presence in its territory of a great variety of wild orchids, and by the lovers of good food which here they can taste many delicacies of the local gastronomy related to peasant tradition.

REASONS FOR VISITING MATTINATA
The coastline, that goes from Mattinata to Vieste is among the most beautiful in Apulia. It’s rich in white cliffs, faraglioni, sea caves, hidden bays and here you will have the impression of having arrived in a corner of paradise. In this stretch of coast there are some of the most beautiful beaches of the whole Gargano including:

The wild orchids every year attract scholars and enthusiasts around the world in Mattinata. It is in this territory in fact that were registered 65 of 88 species of wild orchids that live on the Gargano (for a total of about 230 species present overall in Italy and about 500 in Europe), thus transforming the Gargano in the botanical district most important in Europe. These beautiful flowers, from the extraordinary richness of colors and shapes more unusual, you can admire especially in spring, maybe during one of the many guided tours along the trail toward Monte Sacro.


WHAT TO SEE IN MATTINATA

The historic center of Mattinata, also called “Junno”, still has some traces of the so-called “pagghiére” or “pagliai”, the dwellings dating back to the XVIII century built in dry stone and similar to the trulli of Alberobello. It is worth seeing even within the ancient borough the imposing Palace Mantuano, built in 1840 and now the seat of the Municipal Library, and the elegant Palace Barretta, built at the beginning of the ‘900 and today the seat of the Town Hall.

The Monte Saraceno, located approximately 5 km south from the inhabited center of Mattinata is a site of great archaeological importance as well as landscaped. This mount overlooking to peak on the sea, in fact, is the seat of a Necropolis with well 500 recessed tombs in the rock, of which numerous finds are preserved in the civic museum of Mattinata and in that of Manfredonia. The tombs, with their shape at uterus that symbolizes the return to the prenatal life, represent one of the most important testimonies of Daunian civilization. The tombs were covered by the known “Stele Daune”, the large stone slabs engraved with heads, shields and phalluses according to the importance of the deceased. To reach the necropolis of Monte Saraceno you must take the Strada Statale 89 Manfredonia – Mattinata, up to the branch of Sellino Cavola. From here leave the car and continue walking for about 1 km along an unpaved road overview that offers a splendid view on the plain of Mattinata and that leads up to the end of the mount.

The Monte Sacro, located about 8.4 km North of Mattinata, with its 874 meters above sea level, is the highest peak of the whole Eastern Gargano. Here you can admire the ruins of the Abbazia Benedettina della Santissima Trinità (Benedictine Abbey of the Holy Trinity), a complex composed of a church with three naves dating back to 1058 and a convent in Romanesque style. In its interior there was a chapel dedicated to St. Michael the Archangel and a baptistery with a square plan. The Abbey can only be reached through a trail that climbs up to the mountain.

Villa Agnuli, located near the harbour of Mattinata, in the locality Agnuli, undoubtedly deserves a visit. This is a villa of Roman age dating back to the I century B.C. from which are emerged the testimonies of structures dedicated to the preservation of the oil and the wine, which confirm the historic use of the cultivation of the olive tree and the vine in this territory.

The Civic Museum, in the historical center of Mattinata, from 1982 preserves findings (including rings, brooches, bronzes, vases, fibulas and sculptures) coming from the Daunian Necropolis of Monte Saraceno (VII-VI centuries B.C.). In the courtyard instead are kept two enormous blocks of stone where you can observe the footprints of dinosaurs that, together with the other dinosaur footprints found in the area of San Nicandro Garganico are helping to rewrite the geological history of the Gargano. You can visit the Museum from Tuesday to Sunday, from 9.00 to 12.30, and on Wednesday, Friday, Saturday and Sunday also in the afternoon from 16.00 to 19.30.