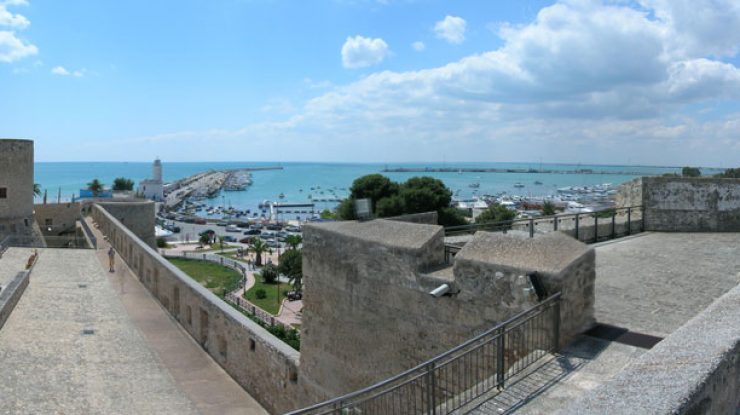 The door of the Gargano  –

For your holiday in Gargano, Manfredonia is an ideal starting point in order to begin your travel to the discovery of the territory. Located at the foot of the Gargano Peninsula, to the center of the wide homonymous Gulf that is opened on the Adriatic Sea, the city is considered the door of Gargano.

If you visit Manfredonia you’ll realize of its important past in which was also one of the main harbours of Italy for relations with the East. Its historic village conserve still today the structure at checkerboard commissioned in 1256 by king Manfred, founder of the city, in order to accommodate the exiles of the destroyed Siponto.

Among its most important monuments, do not miss the imposing Castle, built always by the son of Frederick II to defend the territory from the frequent Saracen invasions. Today the fortress, that overlooks the harbour and from which you can admire a beautiful sunset over the sea, is home to the National Archaeological Museum of Gargano, which houses the famous Daunian steles. It is also worth visiting the magnificent baroque Cathedral, built in 1680, with its distinctive bell tower.

Also worth to seeing its maritime fraction Siponto, today seaside locality at the gates of Manfredonia, but in the past one of the most important cities of Daunia, important harbour in the region of Apulia and seat of a diocese that included all the Gargano Peninsula with its shrines, until a terrible earthquake not destroyed it almost totally in 1223. To witness the ancient greatness of Siponto today remains only its ancient cathedral, the Church of Santa Maria Maggiore.

REASONS FOR VISITING MANFREDONIA
The Gargano National Museum, located inside the Castle of Manfredonia, was opened to the public in 1980. Here are preserved relics from the Neolithic until the Iron Age, but above all they are exposed 1500 samples of Daunian steles, the large funerary tombstones, worked in the calcareous stone, dating from the period between the VII and VI centuries BC and the most important testimony of the Daunian civilization that lived in the territory of Siponto.

The Salso Lake Oasis is a humid zone of great naturalistic interest, incorporated from 1992 inside of the Gargano National Park. Its waters and its cane thickets provide excellent habitat for a wide variety of aquatic birds and fish. Here it is possible to explore the entire valley, visiting the Salso lake with small boats electrical workers, or it can be made bird watching from the turrets situated along a path that winds for about 5 kilometers.

The Carnival of Manfredonia, known also as Daunian Carnival is one of the more important appointments of the year for the city, recognized from the Apulia region like “manifestation of regional interest”. Between the most ancient carnivalesque manifestations in Italy (its first edition goes back to 1952), every year the event begins with the festivity of Saint Anthony Abbot, 17 January, with the traditional mask of Zi’ Pèppe, symbol of Daunian Carnival, in order then to continue in the last Sunday of Carnival and the Shrove Tuesday. Besides the parades of allegorical wagons, between the most joyful and elaborated of Italy, the holiday is accompanied also by competitions literary, photographic, painting, festivals of public square, folklore shows, dances and tastings of typical dishes.


WHAT TO SEE IN MANFREDONIA?

The Swabian Castle was built in 1256 by the king Manfred, but it was completed by Charles I of Anjou and then, in the 1500’s, widened from the Spanish. Today the Swabian Castle accommodates the National Archaeological Museum, where it is exposed to an interesting collection that traces the entire history of the ancient lagoon of Siponto. To make it even more fascinating this fortress is its location: it is placed right adjacent to the beach in Manfredonia.

The Cathedral of Manfredonia was completed in 1274, then destroyed by the Ottoman Turks, and then rebuilt again in the seventeenth century. Dedicated to San Lorenzo Maiorano, patron of the city, it houses the relics of the saint and some works from other churches in the area as the icon of Madonna of Siponto, the other patron saint of the city. To be seen the frescoes inside the Cathedral of Natale Penati from Milan, made in 1940.

The Basilica of Santa Maria Maggiore of Siponto was built in Apulian Romanesque style in the IX century on the remains of an early Christian church. To below its quadrate plan you can visit the crypt. It was the cathedral of Siponto. It is about 3 km from Manfredonia and is now one of the oldest buildings of the city.

The Abbey of San Leonardo in Lama Volara, located about 10 km from the center of Manfredonia, was founded in the XII century in Apulian Romanesque style, but with remarkable Byzantine influences that give it that “oriental” aspect. It was the hospital to assist the pilgrims and crusaders traveling along the “Via Sacra Longobardorum” towards Monte Sant’Angelo. The Church anticipates a beautiful peculiarity: the 21 June of every year, the day of the summer solstice, exactly at noon, a ray of sunlight passes through a rose window of stone which is located in the vault of the central nave and it projects on the floor of the church a rose of light, with 11 petals, thus symbolizing the Pentecost, the Spirit that descends on Earth.

The Church of San Domenico, located in Piazza del Popolo, with annexed the convent, was built in late 1200 by the will of Charles II of Anjou. By do not miss the four frescos of the fourteenth century visible in the ancient chapel..

The Church of the Sacred Family is one of the churches more moderns than Manfredonia, kind in 1982. This that it hits of this church are the imposing mosaics realized from the artist Ambrogio Zamparo.

The Cave Scaloria, in the immediate periphery North of Manfredonia, with its beautiful stalactites is a cavity discovered in 1931 where remainders of interments are recovered that they have made to suppose its use like necropolis.