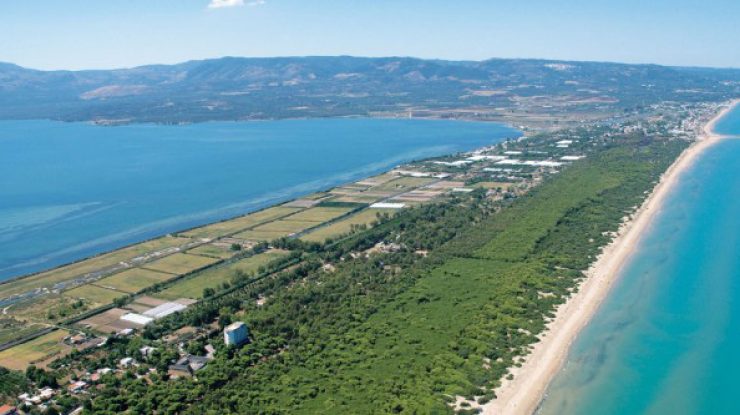 An oasis of the nature between sea and lake  –

It is not easy to find an atmosphere so suggestive in which passing the holidays on the Gargano: from a part 10 kilometers of beach of finest sand washed by the sea and embraced by greens and perfumed pinewoods, from the other, at only one kilometer away, the fascinating panoramas of the Lake. In means a true coffer of natural biodiversity of the Gargano National Park. It is Varano Island, the isthmus that divides the Varano Lake from the Adriatic Sea, to north of the Gargano.

This thin strip of land accommodates the State Natural Reserve of Varano Island, an area of 145 hectares which is distinguished by its dense vegetation near the coastal dune: protagonists of this wonderful natural environment are the pinewoods of Aleppo Pine and Maritime Pine, many of which contorted from the marine breeze, and the majestic eucalyptuses that dominate the rich undergrowth typical of the Mediterranean maquis which stands out among rosemary, birds foot, myrtle, filifera, sarsaparille, cistus and asparagus.

Here they find refuge much species animals, such as the fox, the hedgehog and the hare. Many also the exemplary of present birds along this cordon of land: the turtledove, the hoopoe, the hawk, the golden oriole and the woodcock; while among aquatic birds the gray heron, red or white, the egret and ducks of various species. There are also numerous migratory species that in various periods of the year find an ideal habitat in the Natural Reserve of the Varano Island.

Coveted destination for the trekking enthusiasts and for birdwatchin glovers, the best way to enjoy the wonders of this place is only one: walking.

WHAT TO SEE IN THE VARANO ISLAND?

The very long beach, more than 10 km of finest sand, embraced by the luxuriant Pinewood.

The site of Saint Nicola Imbuti, visible along the road that connects Cagnano Varano to Varano Lake, was an important military base during the world wars and before even a settlement of Benedictine monks.

The Cave of San Michele is situated on a promontory at three kilometers from the center of Cagnano Varano. Here, according to popular tradition, appeared Michael the Archangel.


SPECIAL EVENTS IN THE VARANO ISLAND