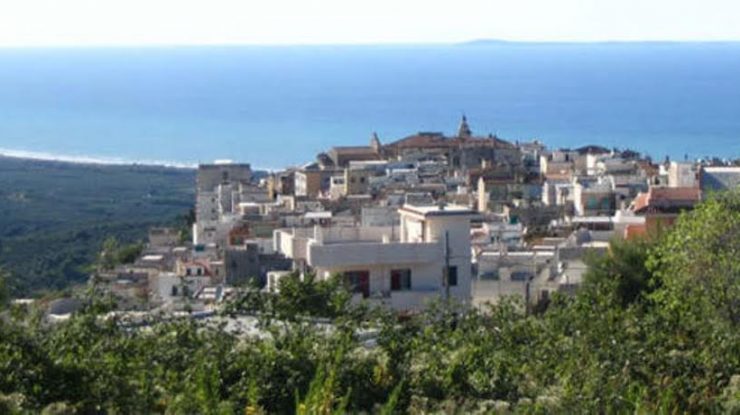 Holidays between history and culture of the Gargano  –

To fully appreciate a holiday in Gargano, you have to discover its towns. Between the municipalities that deserve absolutely a visit there is Ischitella, a characteristic town from the very ancient origins, as evidenced by its walls.

Situated on the depositor North of the Gargano, the town rises on a hill of olive trees and Mediterranean spot to approximately 300 meters above sea level, from which it dominates the Adriatic Sea and the Varano Lake, position that in the past has given at the town the role of defensive emplacement.

Ischitella was, in fact, an ancient Swabian fortress of which today remain the doors of access to the historic centre and the Castle of the 1600. Of remarkable artistic interest the Romanesque church of Sant’Eustachio and the Convent of San Francesco on whose cobblestones stands out the famous tree of Saint Francis of Assisi characterized, as it wants the legend, from the roots to the place of the leaves.

Not to be missed the ancient village of Ischitella, called “La Sottana”, that stands out from the part most new called instead “Ponte”. Entering you’ll come across a tangle of narrow streets and enchanting corners that enclose centuries of life and of history. Here you will find also the house of Pietro Giannone, the celebrated jurist and historian lived to horse between XVII and the XVIII century, to which Ischitella he has given the birthplace.

All the territory of Ischitella is studded of water springs between which “La Grotta del Tasso”, “La Fontana”, “L’Acqua delle Anitre” and “Le Fontanelle”, but there are lots of other. Will not escape to you the beautiful landscape visible from the inhabited center: the view stretches from the surrounding hills to the Adriatic Sea until to the Tremiti Islands and to the Varano Lake and, if the sky is particularly clear, until to the Croatian coast and Abruzzo coast.

REASONS FOR VISITING ISCHITELLA
The Historic Centre is very characteristic, formed up of narrow streets and whitewashed houses terraced,often built on the rock, which they “look” to the sea. It is dominated by the ancient Castle.

The Archaeological Patrimony. The locality of “Civita”, situated in the territory of Ischitella, is declared zone of archaeological interest. Located on the flanks of the Monte Civita, on the side south of the inhabited center of Ischitella, is considered a mine of the history of Gargano. Here, in fact, extends an immense necropolis, with graves defined to “saddlebag” dating back according to the studies at the period between the fifth and fourth centuries BC. The necropolis, according to experts, would reveal a presence of the Samnites and Etruscan warriors. Suggestive is the panorama that can be admired from the top of the hill.

Varano Island. It is the Nature reserve comprised in the Gargano National Park that is developed for an extension of approximately 150 hectares, between the towns of Cagnano Varano and Ischitella, constituted from a pinewood of Aleppo pines. A veritable treasure trove of biodiversity in the Gargano.


WHAT TO SEE IN ISCHITELLA?

The Ancient Castle, today known with the name of Palazzo Ventrella or Palazzo Pinto, constructed in the XII century, was destroyed by an earthquake in the 1649 and entirely reconstructed in the 1714 from prince Francesco Emanuele Pinto, from which it has then taken the name. Only a small roundish fragment, in medieval style and situated in the part south of the palace, has remained visible. The halls inside the Castle have rich decorations on the ceilings.

The Convent of San Francesco conserve the monument to prince Pinto and interesting frescoes of the three hundred. On the churchyard there is the famous tree with the roots to the place of the leaves, that it wants it miraculously sprouted from the stick that Saint Francis of Assisi, passing for Ischitella while he went in pilgrimage to Monte Sant’Angelo, planted in land when he knelt down in order to pray. Even today, although it is dry, the tree attracts the curiosity of many of the faithful and tourists.

The Church of Sant’Eustachio was erected in the seven hundred from prince Pinto on the ruins of the large door of the town, collapsed after the earthquake. Moreover, the church of Sant’Eustachio is connected to the Ventrella castle through of the secrets tunnels, affording so to the noble ones of the time of being able itself to move without being seen from the population. Inside the church there are the statues of Sant’Eustachio, patron of Ischitella, of his wife and of his sons.

The Abbey of San Pietro de Cripta Nova or in Cuppis (from the Latin language that means “between the hills”), located just outside the inhabited centre, is of roman age: of it there is already talk in1058 in a document of Pope Stefano IX. Now unfortunately are visible only the perimeter walls.

The Church of Santa Annunziata, better known as the Church of Santissimo Crocifisso of Varano, built in the tenth century and enlarged in the sixteenth century, is situated on the banks of Varano Lake. Inside is preserved a wooden crucifix dating back to 1300, whereto the inhabitants are very devoted. According to legend, in 1509, in a period of severe drought, there was a procession and on April 23 a blessed rain saved the crops. Since then the April 23 of each year the procession is repeated and takes place a suggestive popular celebration.

The Romandato Torrent develops entirely in the bed, now dried up, of an ancient river and is considered the “Canyon” of Gargano. Along this path, created over millennia by the erosive force of the torrent, you can read the geological history of the Gargano. The trail is rich in flint nodules and sources of spring water. The flourishing vegetation takes on the appearance of a “gallery”, nearly to want protect this treasure trove of biodiversity.