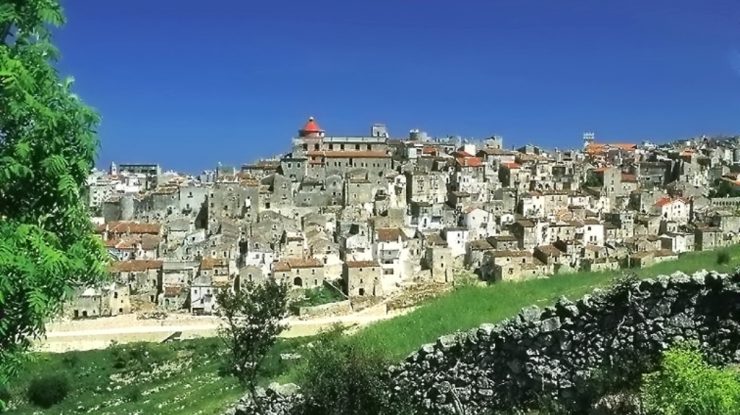 A medieval village in the heart of the Gargano  –

During your holiday on the Gargano, you must insert Vico del Gargano among your itineraries. In the heart of the Gargano National Park, rises on a hill located between the sea and the Foresta Umbra and boasts one of the most picturesque historic centres of the Gargano, so that it has been inserted between the “most beautiful villages in Italy”.

Walking among the narrow streets of the characteristic village you will notice how it is still intact its medieval style. You will be seduced by the interlacing of its narrow streets and by the small stone houses. It is recommended make a stop for admiring the Castle, the numerous churches, the Palace Della Bella, the ancient Trappeto Maratea, the legendary Vicolo del Bacio (Kiss Alley) and all other architectural beauties that you can find guarded in the historic centre.

Vico del Gargano is also known as the Town of Love: patron saint of the town, in fact, is San Valentino, patron saint of lovers but also of the citrus trees, for centuries main source of the agricultural economy of the place. In February, on the occasion of the celebrations of the Saint, the town fills with natural decorations with the citrus fruit of the Gargano and relives the ancient traditions handed down from generations.

REASONS FOR VISITING VICO DEL GARGANO
The ancient village of Vico del Gargano, with its three medieval districts, called Terra, Civita and Casale, is one of the most suggestive not only of the Gargano, but also of the entire Apulia. The small houses respect the spontaneous structure of the time with the stables on the first floor, the stairs leading to the entrance and the characteristic wooden entrance doors. Here you can enjoy also the “trappeti”, the ancient oil mills excavated in the rock, below the dwellings, for the pressing of the olives, signs of the peasant vocation and of the agricultural vocation of the territory.

The Foresta Umbra. Vico del Gargano is also the town more near to the Foresta Umbra, the green lung of the Gargano National Park, a protected nature reserve that extends up to an altitude of 800 meters (a spectacular anomaly for an area that is located only 25 km from the sea). With its 10000 hectares of land, is rich in secular beeches and turkey oaks, oaks, hornbeams, maples, limes and yews. During the excursion also you may see wild boars, badgers, foxes, weasels, roe deer and fallow deers. A mandatory stop for the lovers of nature and a true paradise for the lovers of trekking and birdwatching.

The town of 100 churches. Vico del Gargano is also known for this, sign of the great devotion of the inhabitants of Vico. The visit of all the churches could be a great tour de force religious, but if you have little time, visit at least these: the Matrix Church, the most ancient place of worship of Vico del Gargano (it bears an inscription dated 1675), adorned within by eleven baroque altars; the Church of the Misericordia, inside of which is preserved a valuable body of 1861; the Church of San Domenico which rises in the center of the ancient main square of the town; the Church of San Giuseppe, which turns out to be the most suggestive thanks to its architectural style. Worthy of visit is also the Church of S. Maria of the Suffragio, seat of the old Academy of the “Eccitati Viciensi”, a sort of congregation where the participants discussed about social and economic questions.

For lovers of the sea, to 7 km from Vico del Gargano there is San Menaio, the seaside hamlet of Vico del Gargano. It is distinguished by its large golden beaches and the large pinewoods of Pine of Aleppo. Among these stands out the secular Pinewood Marzini that demarcates one of the most beautiful bays of the Gargano, the Baia di Calenella (Calenella Bay), a long beach amber dominated by Monte Pucci. Also note the presence of some ancient watchtowers built to check the raids of enemies, including the Tower of Monte Pucci and the Tower of Preposti.


WHAT TO SEE IN VICO DEL GARGANO?

The Palace Della Bella, wanted to by Ignazio Della Bella, is arose at the beginning of the XX century, inspired by the neo-gothic-Florentine model of architecture of Palazzo Vecchio in Florence.

The Castle stands out the imposing on the houses of the ancient village. Of Norman origin, has the quadrilateral shape and, in the course of the centuries, has undergone numerous changeovers.

The Vicolo del Bacio (Kiss Alley), a little street of just about 50 cm in width and roughly 30 meters in length, place beloved by the sweethearts, especially on the occasion of the patronal festival of San Valentino: here, in fact, given the small size of the alley, the lovers are “forced” to stay near.

The Necropolis of Monte Pucci. It is located on a small promontory between San Menaio and Peschici, near the terminus of the line of the Railways of the Gargano. It is a complex of paleochristian hypogea, consisting of over eight hundred hypogeal pit tombs and burial niches surmounted by arcosolia, dating between the IV and VII century AD. A site of great historical and archaeological interest.

The Trappeto Maratea Museum, situated in the ancient village of Vico del Gargano, is an oil mill dating from the fourteenth century where it concentrated the olive oil production of the territory. With the great millstone of local stone and with other ancient useful tools for agricultural works, today this place is an ethnographic museum that preserves the memories of a town firmly bound to the culture of olives. Visiting it means immersing yourself in a past still alive in the memories of inhabitants of Vico and jealously guarded.