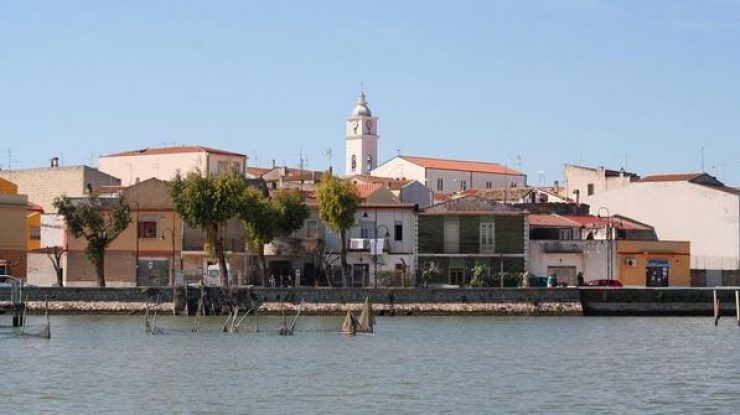 Lesina, between sea, forest and lagoon –

Situated on a small peninsula on the southern shore of the Lake Lesina, one of the largest lagoons of the Mediterranean, Lesina is the northern gate of access to the Gargano.

Frequented since prehistory, as witnessed by the many finds of different ages found in the area and in the waters of the lagoon, the village was founded by a group of dalmatians fishermen attracted by the abundance of fish in the lagoon, before being occupied by the Greeks and Romans, for then also becoming the destination of refuge of the inhabitants of Lucera and of the Tremiti Islands. From 1254 until the ‘500 it was also an important religious center because episcopal seat.

Today the town preserves its historic charm both in the ancient village, with the imposing Cathedral dedicated to Santissima Annunziata (Most Holy Annunciation) and the Palazzo Vescovile (Episcopal Palace) dating back to the ‘200, but also outside the town with the ruins of the Abbey of Santa Maria Ripalta, near the Fortore river, the site of the “Pietre Nere” (“Black Stones”), the complex of volcanic rocks dating back to the Triassic period and the charming Island of San Clemente which with the low tide emerges from the Lake.

The true wealth of the town, however, it is constituted by the extraordinary natural heritage which occupies the entire eastern part of the Lake Lesina and that since 1981 constitutes “Natural Reserve of Animal Restocking” becoming really an oasis of wildlife protection and representing, with its surface of 930 hectares, an integral part of the Gargano National Park.

A five minutes by car from the small town there is Marina di Lesina, the seaside resort directly overlooking the Adriatic Sea and destination of holidays in Gargano. Equipped with hotels, campsites, tourist villages and aquatic parks, Marina di Lesina has been repeatedly rewarded among the italian tourist resorts for the purity of its sea waters.

Lesina is a destination obligated also for the lovers of the flavours of the Gargano and its typical products. The renowned eel, that has become Slow Food Presidium, in fact, lives in the Lake Lesina and it’s very much appreciated by chefs and nutritionists both for its high nutritional values that for its excellent flavour.

REASONS FOR VISITING LESINA
The Lesina Lagoon is certainly the first destination of a tourist itinerary in the territory of Lesina. Officially counted among the lakes of Italy, its waters have a very similar configuration to that of the sea, although in it flow into several torrents of fresh water. It represents a very particular natural and ornithological zone with more than 20 thousand individuals of birds and about 200 species that they find nourishment in its waters including Mallards, Pink Flamingoes, Knights of Italy, Coots, Herons, Egrets and more. Do not miss the panoramic tour of the lagoon aboard the “sandalo”, the traditional boat used in the past for crossing the lagoon.

The Visits-Aquarium Center of the Lagoon of Lesina certainly deserves a visit. Inside you can watch an aquarium of fish species in the lagoon, with 14 fish tanks, the first in Europe of brackish water, a museum section devoted to naturalistic aspects that characterize the territory and the lagoon, and an ethnographic section called “Casa del Pescatore” (“House of Fisherman”) dedicated to the culture of community of Lesina, to its costumes and to its traditions. The lovers of sport fishing can enjoy guided excursions or take part in various fishing trips for refining their technique. The visits center can be visited from Tuesday to Friday from 8.00 to 13.00 and on Saturdays and Sundays from 8.00 to 13.00 and from 15.00 to 20.00.

WHAT TO SEE IN LESINA?

The Island of San Clemente  emerges from the lake with the low tide, with the characteristic cross placed for recall the ancient church, offering a truly evocative scenery. It is what remains of an ancient monastery, first destroyed by the Saracens and then rebuilt in 1165 by the will of the Abbot of San Clemente and finally submerged by the waters because of a seaquake. It is located about 400 meters to the north of Lesina.

The Abbey of Ripalta is situated in the area Ripalta, a hamlet of Lesina (which is about ten kilometers), between the right shore of Fortore river and the lake. Seat of a community of Cistercian monks of Abruzzo who settled there in the thirteenth century, here in 1255 was built an abbey where the monks could work the fields, pray, write manuscripts and produce music. Partially destroyed by the earthquake of 1627, it was recovered by Celestini at the beginning of the eighteenth century. Today of all that complex remains only the Church of Santa Maria.

The Cathedral of the Santissima Annunziata, in Greek Style-Romanesque style, was built between 1828 and 1837 on the ruins of the Church previously destined to the cult of the Annunciation that had not survived to the earthquake of 1627. The current church has an elegant façade composed by columns with Romanesque arches. Also worth a visit the interior of the church where you can admire the marvelous frescoes of the neapolitan master Bocchetti Gaetano of Piedimonte of Alife that narrate the most salient episodes of the life of Jesus.

The former Bishop’s Palace dates back to the ‘200 and, with its facade and its artistic portal, constitutes one of the most interesting examples of building industry of eighteenth-century in Lesina. This is confirmed by the presence of the coat of arms of Orazio Greco, repositioned after the restructuring which took place in 1733 after the earthquake. Here in 663 A.D. took refuge the Bishop of Lucera, fleeing from persecutions of the Byzantine Emperor Costante II.

Pietre Nere, the complex of black rocks of volcanic formation, which date back to the Triassic period. Located in Marina di Lesina, it’s considered a site geologically rare and without doubt the most ancient ever found in Apulia.

Bosco Isola, the wide strip of nature long about 18 km, that separates the lagoon from the sea. Its dune is bounded by the two canals, Acquarotta and Schiapparo, that turn the Lake Lesina into a veritable lagoon. Its flora is typical of the Adriatic coast, with oaks, live oaks, Strawberry Trees, Aleppo pine, rosemary, juniper, but here are born and grow even rare plants such as the “Cisto di Clusio” (“Cistus of Clusio”), present only in the territory of Lesina. Not by chance the entire Bosco Isola is the subject of study by part of many researchers and experts of botany, earning the nickname of “great ecological laboratory”.

The Church of San Primiano Martire, the patron saint of the small town, situated in the center of the ancient village of Lesina, in antiquity belonged to the Confraternita del Santo Rosario (Confraternity of the Holy Rosary).