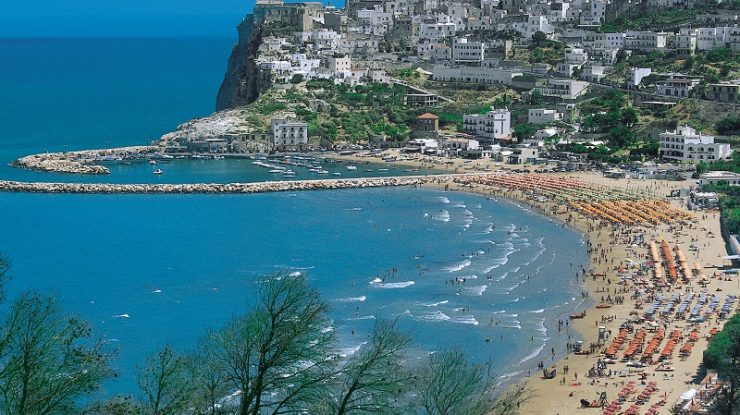 A terrace overlooking the Adriatic Sea  –

Whatever your holiday destination on the Gargano, don’t you can make less than make a stop in Peschici. Perched on a cliff that dominates one of the most extraordinary bays of Italy, every year this locality remains printed in the memory of thousands of tourists.

In addition to its wide beaches that alternate with small coves and white overhanging rocks, the town boasts a historic centre really fascinating: a labyrinth of narrow streets, hidden squares, steep staircases and small white houses, typical of the coastal localities of Apulia. From here you can also enjoy postcard glimpses and a spectacular view over the Baia di Peschici (Peschici Bay).

The origins of Peschici are deeply linked to the sea. The village was founded, in fact, in the XI century by Slav soldiers sent to the area by Ottone I in response to the threat of the Saracens. Testifying a secular history made from attacks and incursions are today the sighting towers, built in the second half of the sixteenth century to defend the territory from pirates and corsairs.

REASONS FOR VISITING PESCHICI
The Coast of Peschici extends for more than 20 km and encloses wonderful beaches, from the more tourist to the wildest. In addition to the enchanting Baia di Peschici (Peschici Bay), with its long golden beach, from Peschici toward Vieste is encountered the wonderful Baia di Manaccora (Manaccora Bay), one of the most wonderful panoramas in Gargano. Not very far you can admire the beautiful Baia di Calalunga (Calalunga Bay), Baia del Turco (Turkish Bay) and the uncontaminated Baia Zaiana (Zaiana Bay). You should also visit the Baia di Calenella (Calenella Bay), between Peschici and San Menaio.

The historic centre is an obligatory stage if you want enjoy all the beauty of Peschici. It is a maze of narrow streets, stairs and houses whitest that degrade toward the sea. Between shops of typical products and handicraft articles, here you will also find many inns, taverns and restaurants with the typical flavours of the local cuisine. Don’t miss also the wonderful panorama that is enjoyed from Belvedere of the Baronial Fence. Also worth seeing is the church dedicated to the Patron Saint, Sant’Elia, to which the inhabitants of Peschici are very devoted.


WHAT TO SEE IN PESCHICI?

The Castle rises in the heart of the village and divides the historic centre from the new zone of Peschici. It was built around 970 to protect the coast of Gargano, but only under Frederick II it found of new splendor, becoming in Spanish age an important bulwark against the Turkish incursions. The walls are reinforced by semicircular turrets, from which stand out Porta del Ponte and Porta di Basso, the ancient ways of access to the town.

The Grottone of Manaccora, which is also called Grotta degli Dei (Cave of the Gods), located on the north side of the Baia di Manaccora (Manaccora Bay) to 7 Km from Peschici, on the coastal toward Vieste, is an archaeological site of international interest and one of the most important testimonials of the Italian Bronze Age. It is a natural cavity, long one hundred meters, where there were found utensils, weapons and funeral equipments as well as the remains of a vast primitive dwelling.

The Sighting Towers are really suggestive: built around 1500 as a defense from the enemy that could come from the sea, are visually connected between them. Among those survivors, including Torre di Cala Lunga (Tower of Cala Lunga), Torre di Sfinale (Tower of Sfinale), Torre di Gusmay (Tower of Gusmay), the most famous is certainly Monte Pucci, that enjoys a wonderful panorama over the clear waters of the Adriatic Sea

The Trabucchi are one of the symbols of the whole Gargano. The coast of Peschici has as many as seven Trabucchi. Located on rocky spurs to peak on the sea, they are ancient instruments used for fishing from the complex and fascinating architecture: they are constituted by wooden poles that intertwine to wires and pulleys. Their image offers unique scenes, the fruit of the perfect fusion of past and present. For their historical and architectural value, today the Trabucchi are recognized as true treasures of the coastal and marine area of Gargano.

Abbey of Calena is one of the most important monuments of the Gargano, situated at the foot of Peschici. Built toward the end of the IX century, originally inhabited by a community of Benedictine monks, in the medieval age became one of the richest and most powerful abbeys of Southern, finishing then to be contention between the two powerful abbeys of Montecassino and S. Maria of Tremiti. Inside it there is a wooden statue of Madonna with Child.