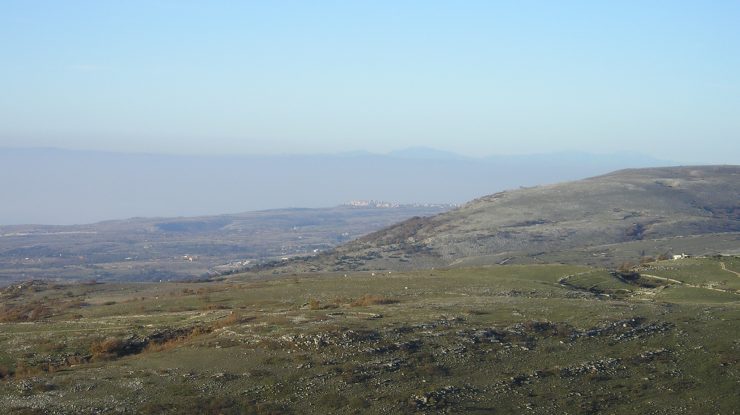 The Balcony of Apulia and its precious archaeological treasures  –

During your holiday in Gargano, do not miss the opportunity to visit Rignano Garganico, the smallest of the municipalities of the promontory. Perched on a hill that from the top of its 600 meters dominates the immense Tavoliere of Apulia, this town offers a wonderful view on the plain of the Land of Capitanata earning the nickname of “Balcony of Apulia“.

The town boasts ancient origins dating back to the prehistoric age as evidenced by the immense historical heritage found in archaeological settlements present in its territory, including the famous Grotta Paglicci, Grotta Spagnoli and the Dolmen Lamasecca and of the Plain of the Madonna of Christ.

Walking through the historic center, between little houses, narrow streets and arches, you can admire the oldest and important church in the town, the Mother Church Maria Santissima Assunta, and the majestic Baronial Palace of the XII century. If you go in the part most western of the town, you can easily reach the panoramic viewpoint the Croce, the best point from which you can admire the wonderful view offered from Rignano Garganico.

From a naturalistic point of view, you cannot miss the Centopozzi Doline, just a few km from Rignano Garganico, the third largest doline of Europe.

REASONS FOR VISITING RIGNANO GARGANICO
The Balcony of Apulia. The panorama that you can admire from Rignano Garganico is worth a complete holiday: sweeps from the Tavoliere of Apulia, with all its variegated colors, to the Gulf of Manfredonia, the Land of Bari and the Monte Vulture until you see, on clearer days, the peaks of the Maiella in Abruzzo. Two are the points where you can enjoy the show better: the panoramic viewpoint that surrounds the large part of the historical center and the Croce, in the west part of the town, that hosts a launch base for the lovers of Hang Gliding or Paragliding.

The living crib of Rignano Garganico is among the most long-lived in Apulia and in southern Italy. The event takes life every year between the end of December and the beginning of January, with over 300 walkers-on that lead in scene the Nativity in the picturesque narrow streets of the village. Along the path of the living crib you can also taste the typical products of the territory and discover the ancient local traditions.


WHAT TO SEE IN RIGNANO GARGANICO

Characteristic districts. Walking between manor palaces and the typical white houses, it is easy to come across in the picturesque area “Sotto il Castello”, where once dominated the famous aragonese Castle of which are still visible the two towers. Continuing along the steep alleys we walk downhill towards another characteristic district, the district of “Vuccolo”: If you meet a local person in the vicinity, ask him the origin of this curious name. Another suggestive corner is the “Belvedere” where once the main town gate was open and from which you can enjoy a magnificent view on the beach and orange groves.

The Centopozzi Doline is considered the third doline largest in Europe, second in Apulia after Pozzantina Doline (in the territory of San Nicandro Garganico). It owes its name to the countless created wells, underground today but a time used as water tanks. From the doline wind their way many thematic paths including the Grotta Paglicci and the Madonna of Christ. The doline is located about 2 km from Rignano Garganico along the road that leads to San Marco in Lamis. Grotta Paglicci, the famous deposit dating back to the Palaeolithic, is considered one of the most important archaeological sites in Europe. From 1961 to today inside have been discovered more than 45,000 finds, almost all preserved in the archives of the Archaeological Superintendence of Taranto and in the museum of Rignano Garganico: between these several wall paintings that have allowed to the researchers to date back to the exact historical period of the finds, i.e. to the Upper Palaeolithic. In addition to paintings have been found human skeletons integers and partial, the movable art objects, handprints, remains of animals and other discoveries that date back to the Middle and Lower Palaeolithic. The settlement represents an extraordinary testimony not only for the study of the origins of man, but also for the history of art. It dates back only to the 2015 also the discovery, inside the grooves of a millstone present in the cave of residues of oat starch dating back to 32,000 years ago, a sign that, already in the Upper Paleolithic, were known the techniques for the preparation of flour from cereals. The cave is situated at 6 km from the center of Rignano Garganico and is reached by following the Vallone of Settepende. The Dolmen that are present in the territory of Rignano Garganico are two. One is located in the Plain of the Madonna of Christ, a few steps away from the Grotta Paglicci. The other is located in Vallone of Lamasecca, a few kilometers from the village, and goes back to the Bronze Age. The two prehistoric tombs built with stones are a further confirmation of the human presence in this territory from the Paleolithic beginnings and for the whole of the Neolithic. The Church of Maria Santissima Assunta, in the historical center of Rignano, is the most ancient and important church in the town. It is Paleochristian origin and inside you can admire some paintings by Nicola Penati. The Baronial Palace, one of the historical buildings the most important in the town, is traced back to the period that goes from 1095 to 1129. It was built on a building more ancient and a time, next to it, there was the former medieval castle used as military fortress of which today remains the beautiful cylindrical tower and small traces of the ancient walls of the town. The Madonna of Christ, situated 6 km from Rignano and completely surrounded by olive trees, is a medieval church that is much loved by the inhabitants of Rignano that here they worship the beautiful statue of the Madonna with Child and they find themselves for the feast celebrated on the Tuesday after Easter. The Museo Grotta Paglicci, situated in the historical center of Rignano, preserves some of 45,000 finds discovered in the Grotta Paglicci. The study days and didactic laboratories are also organized here.