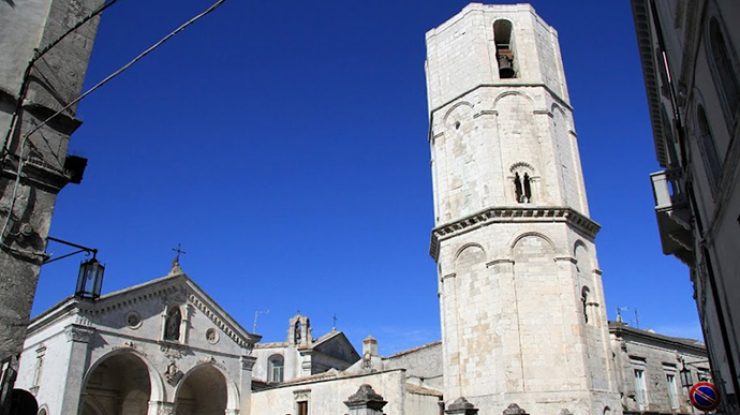 A concentration of history and faith in the Gargano  –

During your holiday on the Gargano, cannot miss a visit to the town of Monte Sant’Angelo. Perched on a hill that overlooks on one side on the Tavoliere delle Puglie and on the other hand on the Gulf of Manfredonia, is a place full of charm for both the spirituality that emanates for both the history written between its walls.

The history of the town is inextricably linked to the cult of the Archangel Michael, to which is dedicated the homonymous Sanctuary. The Holy Cave, also called Celestial Basilica, where it fits the apparition of the Saint, was an obligatory stop for pilgrims and crusaders direct in the Holy Land becoming one of the pilgrimage destinations most famous and oldest in the world.

Monte Sant’Angelo, however, is not only faith and history: surrounded by natural landscapes, among the most beautiful of the Gargano National Park, the town is also a place rich in traditions, folklore and typicality gastronomic.

REASONS FOR VISITING MONTE SANT'ANGELO
The Sanctuary of St. Michael the Archangel, built in 493 AD by the Lombards in correspondence of the cave where, according to legend, there occurred the apparitions of the saint (490, 492 and 493 AD), is the most famous sanctuary of the Latin West dedicated to the Archangel Michael. Destination of pilgrimage from 15 centuries and obligatory stop for the Crusaders that demanded to the Saint the strength for facing the travel in the Holy Land, the Sanctuary was also visited by St. Francis of Assisi. Since 2011, the Sanctuary is registered in the list of the Unesco World Heritage, entering to be part of the group of the most authoritative Cultural Heritage of the world, the World Heritage List. The Sacred Cave of Saint Michael the Archangel of Monte Sant’Angelo is also the only Italian in the “top 10” of the sacred Caves of the world selected in 2014 by the National Geographic. Within the Sanctuary you can visit also the Lapidary Museum, that is the Crypts that testify the ancient passage at the Sacred Cave of St. Michael and in which are preserved works of various eras found in the sanctuary, and the Devotional Museum, that collects the gifts left by pilgrims as a sign of faith.

The gastronomy of Monte Sant’Angelo is renowned throughout Italy. The Golden Palm goes surely to the mythical Bread of Monte Sant’Angelo, famous not only for the goodness and the epic dimensions (the loaf can weigh up to 6/7kg), but also for its duration that makes it eatable even at 8/9 days from the leaving the kiln. It is worth however also to taste the typical ostie ripiene, stuffed with almonds and honey.

The local handicraft, is flourishing here. Of popular origin, has been handed down from generation to generation by focusing on the working of the wood, wrought iron and local stone. Very characteristic are the tools for the kitchen as the “chucchiere” (ladles, large forks, dishes and other ornaments), derived by the robust olive-wood. Unique in its kind is the production of statues of St. Michael the Archangel, made in local stone, authorized even by the pope with Papal Bull.


WHAT TO SEE IN MONTE SANT’ANGELO?

The Rione Junno, built in the VI century around the famous Sanctuary of St. Michael the Archangel, is the oldest district of Monte Sant’Angelo. It’s composed of houses with roofs double sloping and bizarre chimneys, leaning one against the other and mutually connected by arches and stairways. The spontaneous architecture of this district is the witness of the community sense of the ancient social structure.

The Norman-Swabian-Aragonese Castle stands out in a dominant position, a few meters from the Basilica. Built in 800, was built at the request of the Normans for then become residential house with the Swabians and a prison with the Angevins. With the Aragonese is returned to its original nature. From the top of the castle you can enjoy a spectacular view that sweeps from the Gargano up to the Gulf of Manfredonia, to the Tavoliere and to the Murge.

The Baptistery of San Giovanni in Tumba is called erroneously Rotari Tomb, for a wrong translation of the epigraph contained in the Baptistery. You will find it walking through the whites and narrow alleys of the Rione Junno. It is not yet clear the original use of this monument. The Baptistery, together with the adjoining church of St. Peter and the Church of Santa Maria Maggiore, constitutes the monumental complex of St. Peter.

The Museum of Arts and Popular Traditions of Gargano certainly deserves a visit. Here you can admire the tools used once, objects related to the cult micaelico and tools of everyday life.

The Church of Santa Maria Maggiore is considered by some the cathedral of Monte Sant’Angelo. In the Romanesque-Apulian style, together with the Baptistery of San Giovanni in Tumba forms the monumental complex of St. Peter. Of very ancient origin, it was rebuilt around the middle of the XI century by Leone, the archbishop of Siponto. Inside, you will find frescoes of the Byzantine school, among which that of St. Michael the Archangel with the garments of a dignitary byzantine.