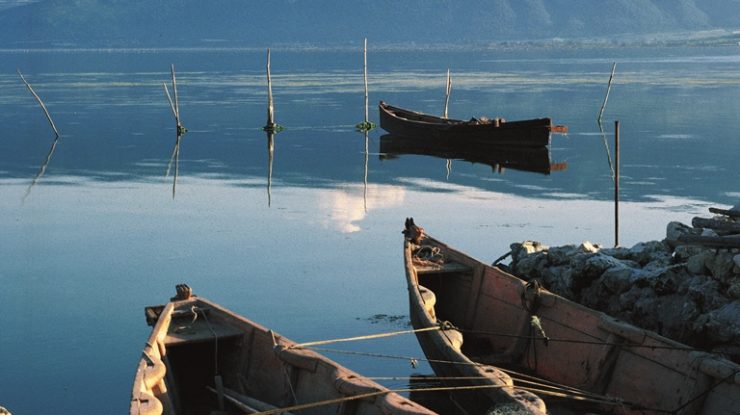 The fascination of the Varano Lake is the demonstration that a holiday on the Gargano goes very beyond the blue of the sea and the green of the Forest. It is situated on the northern coast of the Gargano and is the largest Italian coastal lake and the largest in southern Italy.

Traditionally is called lake, but in reality it is a lagoon: fed by many springs of fresh water from the nearby mountains, it is separated from the Adriatic Sea by a strip of land along just one kilometer, called Varano Island, but communicates with it through two canals: The Canal of Varano and the Canal of Capoiale.

Famous for the fishing for eels and mussels and for the number of waterfowl that live there, such as ducks, herons, flamingos and cormorants, the Varano Lake is a true haven for local fishermen which every day with their sandali (the typical local boats) animate the silent immobility of the Lake, becoming, even their, part of lacustrine landscapes really fascinating.

With an excursion boat on the Varano Lake, you can admire sceneries of rare beauty: the lake banks covered of secular olive trees and rich of caves and natural sources, the Crucifix that emerges from waters in the middle of the Lake and the small church of the SS. Annunziata located on the eastern shore of the lake, where it’s guarded a beautiful Crucifix of the 1330 venerated by the inhabitants of Ischitella and surrounding towns. For discovering the landscaping and wilderness beauties of this place it’s possible also follow the lakeside on foot or by bicycle.

During the Second World War, the Varano Lake was used as a support base for submarines and seaplanes engaged in war actions in the Adriatic Sea.

WHAT TO MAKE ON THE VARANO LAKE?
A boat excursion to enjoy the charme of Varano Lake: you will discover the shores of the Lake rich of caves and natural springs, you will admire the suggestive Crucifix that emerges from waters of the Lake, until to arrive to the Sanctuary of the Crucifix of Varano, where you will be able to moor for visit the little church and learn its history.

Cross the lakefront on foot or by bicycle for discovering the natural and wilderness beauty of this place.


WHAT TO SEE IN VARANO LAKE?

The Church of Annunziata, known by the name of the Holiest Crucifix, is located on the eastern shore of Varano Lake. An old legend has it that this little church, which already existed in the 16th century, is the only witness of the city of Uriah, buried by sea for divine punishment. Inside it houses a beautiful wooden crucifix dating back to 1300, to which local residents ascribe miraculous powers: in 1509, during a time of severe drought, there was a procession and the 23 April the rain down came to save the crops. Since then the procession is repeated every year, on the same day, within a suggestive popular festival.

The Crucifix that emerges from the waters can be admired on the East side of Varano Lake, near the shore on which stands the Church of Annunziata.

The sunset over Varano Lake is a sight that never fails to surprise for the wealth of reflections from different shades.

The site of Saint Nicola Imbuti, located along the road connecting Cagnano Varano to Varano Lake, initially was a settlement of a Benedictine monastery, in 1058, and crossing point of many pilgrims direct to Monte Sant’Angelo, then during the First and Second World War, was the site of a military seaplane base dedicated to Ivo Monti. Here they carried out all the activities needed on a military base, from dormitories to the offices, from the training of pilots to the repair of seaplanes. Of considerable strategic importance especially in the conflict between Italy and Austria, the military base after the wars fell into disuse up to appear today in a state of total abandonment.