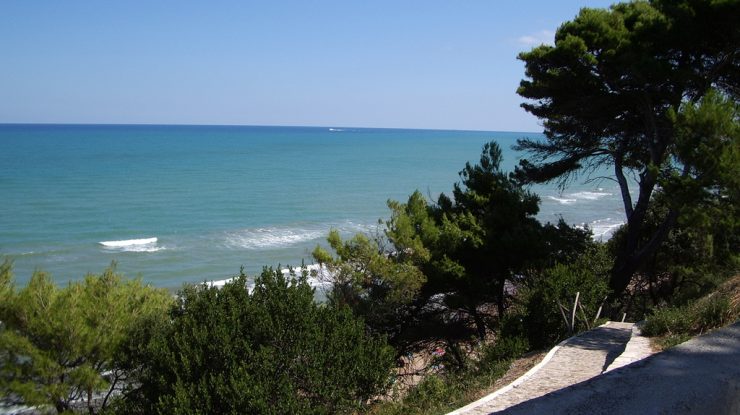 Between golden beaches and secular pinewoods –

If you come in Apulia because you want to spend a relaxing beach holiday, we recommend you to visit also San Menaio, always been known for its long beaches of very fine sand lapped by a blue and crystalline sea.

Immersed in the Gargano National Park, San Menaio is located on the north coast of the Gargano, at 7 km from Vico del Gargano referred is the only hamlet. It stretches from Rodi Garganico to Peschici, characterizing itself for its forests of pine of Aleppo, among the oldest and largest in Italy, including the Pineta Marzini, which cover the territory until it touches the beaches. But to enriching the entire landscape of bright colors and heady scents there are also its citrus groves.

Between the green of the pine forests and the blue of the sea of San Menaio, you will not miss the charm of the most impressive coastal towers of the Gargano: it is the Tower of Preposti, fourteenth-century structure overlooking the sea, a time with functions of defense and customs.

Sparsely populated in winter, during the summer San Menaio becomes a tourist center, frequented both from young people who by families that choose this place for their holidays in Gargano and they stay in the many hotels, residences, villages, campsites and restaurants in the area.

San Menaio was also celebrated in comic books through the pencil of Andrea Pazienza, the artist who died at the age of 32 years that although not being a native of San Menaio, chose the town as destination of every summer, as his adoptive dwelling. Is dedicated to him the waterfront Pazienza.

REASONS FOR VISITING SAN MENAIO
The Beaches of the entire territory of San Menaio, counted among the most beautiful of all the Gargano, are four. Characterized by soft and fine sand and bathed by a crystalline sea with sandy bottoms and sloping, they are ideal for those who love to spend whole days at sea letting themselves be gently rocked by the waves, but also for the families with children who here can enjoy their holiday in Gargano in total safety.

The Beach of San Menaio. With its coastline of very fine sand, wide in some places also 60 meters, goes from Murge Nere to the Punta Molino, where the modern establishments and a beautiful seafront follow each other.

Beach of the Cento Scalini (Hundred Steps). Said so why do we get through a path with 100 steps, it is characterized by a sandy shore and from a high rocky promontory that dominates it, arriving with its vegetation up to the dunes. Also called the beach of Tufare, you can also reach it by walking on the sand from the beach of San Menaio.

Beach of the Murgia of Madonna. It owes its name to the rock (the “Murgia”) on which, according to tradition, Mary would have appeared to a group of fishermen. But it is however also called the beach of the Sospetto (Suspect), for the homonymous karst cave overlooking the beach. It presents a rocky shoreline with sand mixed with gravel and can be reached through trails that cross the pinewood or by sea, skirting the nearby beaches and bypassing the rocky areas.

Beach of Calenella. It is the last beach of San Menaio, before arriving in the territory of Peschici. It is delimited by thick pinewood Marzini to the west and from the medieval tower of Monte Pucci to the east. In the surroundings of this beach there is the Necropolis of Monte Pucci.

WHAT TO SEE IN SAN MENAIO?

The Pinewood Marzini. A time also called Difesa Marzini, it is a vast wood of secular Aleppo pines that extends for about 15 square kilometers between the beaches of San Menaio and the reliefs of Vico del Gargano. Easily reachable on foot or by car, it is ideal for take quiet walks in the nature, for practicing trekking, mountain bike, running and north walking.

The Tower of Preposti. Also called tower of the customs officers for its original function of customs, it was built in the XIV century very probably as an element of defense in a place easily accessible by sea. The tower, in fact, is only a few tens of meters from the shore line of San Menaio.