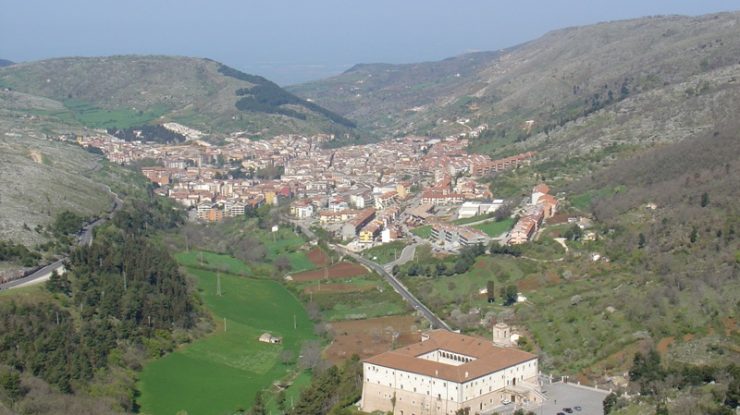 A journey along the paths of faith, between ancient rites and mysterious caves –

Land of faith, legends and folklore, San Marco in Lamisis one of the centers of the Mountain of the Sun more interesting to visit during a holiday in Gargano.

Nestling at the center of a karst basin and surrounded by dense woodlands, San Marco in Lamis is a destination much appreciated also by the lovers of nature, speleology and archeology. In addition to Dolina Pozzantina, the spectacular natural amphitheater that you can admire along the road that connects San Marco to San Nicandro Garganico, in its territory is present also the Bosco Difesa, inside of which there is also the Cave of Montenero, one of the most known of the Gargano, with its enchanting scenery of stalactites and stalagmites.

On one of the hills surrounding the town on the road to San Giovanni Rotondo, it rises also the village of Borgo Celano, a hamlet of San Marco populated mostly in summer, where is located the Paleontological Museum.

REASONS FOR VISITING SAN MARCO IN LAMIS
The Procession of Fracchie. San Marco in Lamis is also famous for this singular religious event that repeats from three centuries every Good Friday. The “fracchie” are large torches made with tree trunks filled with wood which are ignited for becoming true and proper torches, incurred by iron wheels and entrained by the so-called “fracchisti”, that illumine the path of Madonna Addolorata (Our Lady of Sorrows) along the streets of the town. The suggestive procession, charging of faith and pathos, is considered one of the rites the most beautiful of Holy Week in Italy.

WHAT TO SEE IN SAN MARCO IN LAMIS?

The Sanctuary of San Matteo  rises on a rock at about two kilometers east of the town. It will seem apparently like a great fortress, but in reality is one of the most ancient shrines of the Gargano. Founded by the Benedictine monks, was initially known as the convent of San Giovanni in Lamis, as it is also mentioned in many medieval documents. It is not known the exact date of his birth. What is certain is that initially had the function of take care of the pilgrims who at the end of the V century they arrived in Gargano for reaching the Cave of the Archangel Michael in Monte Sant’Angelo. After the Benedictines arrived later the Franciscans, which also they had the merit of making the shrine in a fundamental point of reference for the social and economic activities of the territory. In the second half of the XII century was donated to the monastery a relic of San Matteo (Saint Matthew) and for this to the shrine was given the name of Convent of San Matteo. Today the monastery is still the destination of many pilgrims, but also of scholars attracted by its rich library that contains over 60.000 volumes, including valuable works and medieval artifacts. An attraction for visitors is also the natural landscape where the monastery is inserted: surrounded by woodlands rich of botanical species, from here you can also enjoy an extraordinary view on the territory of San Marco in Lamis.

The Sanctuary of Santa Maria of Stignano, born also for offering to pilgrims a shelter along the path toward the sanctuary of Monte Sant’Angelo, is situated about 4 km from San Marco in Lamis, within a valley of great charm, called Valle di Stignano (Valley of Stignano). The Convent has a facade sober, in Romanesque Abruzzese style, but entering in its inside you can contemplate a beautiful loggia of the Sixteenth Century, a valuable well of 1576 and paintings depicting the life of St. Francis who, according to a legend, he would have passed for this valley in 1216, blessing the fruits of this land.

The historic center of San Marco in Lamis still retains its medieval charm. Entering in the heart of this village, you will find yourself among the narrow streets, stairways, low white terraced houses and blind alleys. The first inhabited center of the country, was once called “Padule” (i.e. swamp) because at one time the area was very marshy. It is worth visiting the Chiesa Madre (Mother Church) Santissima Annunziata, the most important place of worship of the town, dating from theXI century. Adjacent to the historic center, instead you will find the Palazzo Badiale, dating back to the XV-XVI century, today the Town Hall, but a time seat of the abbey and comprising in its interior the prison and a chapel dedicated to San Rocco (St. Roch).

Bosco Difesa, with its 2000 hectares, is the more important woodland in the territory of San Marco in Lamis. Here it is easy to run into the limestone formations typical of the Gargano like the dolines, the old mule tracks, the characteristics ‘piscine’ (natural depressions that collect the rainwater, used to quench the thirst of the cows Podoliche, that from their milk is produced the Podolico Caciocavallo, Slow Food Presidium). Visiting this woodland then in the spring months you will notice how the undergrowth is colored with beautiful flowerings, including beautiful wild orchids. Located north of the Convent of San Matteo, can be reached by following the provincial road toward Cagnano Varano.

The Cave of Montenero is considered one of the caves most important of all the Gargano. Immersed in the Bosco Difesa, is a deep cavity about 100 meters and long about 1.5 km. At the beginning it drops almost on all fours to a few hundred meters to then being faced with a spectacular scenery made of stalactites, stalagmites and other subterranean streams. The cave is closed by a gate because it is object of research. To schedule a visit, you can contact the Consorzio Gargano Ok.